END_OF_DOCUMENT_TOKEN_TO_BE_REPLACED

Domestic Timber Production, often using chainsaw milling, can range from 30-40% of total timber production in Guyana, Republic of Congo, Democratic Republic of Congo and Uganda, to greater than 50% of total timber production in Ghana, Cameron and Peru, to almost 100% of total timber production in Liberia. While chainsaw milling provides for local economic development opportunities because of its low-cost, capacity to be applied in inaccessible areas, and its lower impact on the environment through lack of use of tractors and skidders, it is generally either an unregulated activity or an illegal activity as practiced in-country supplying domestic timber production needs. In fact, operating informally can often be much easier for local chainsaw milling crews of three or four individuals since if permits are required they are often difficult and costly to obtain requiring substantial upfront time and capital. This ironically has led to, as in the case of Indonesia, of domestic chainsaw milled lumber being sold illegally into the regional international market under the radar of international scrutiny since little time or effort is spent by appropriate authorities and civil society investigating and regulating chainsaw mill activities.

As is the case in Peru, local chainsaw milled markets are also impacted by the recent global economic downturn that resulted in a decreased demand for lumber from formal sawmills that in turn decreased the quantity of rejected scrap lumber from the formal sawmill available to be sold into the domestic market.

Many countries also incur lost stumpage fees by the lack of regulating the chainsaw mill market with Liberia alone reporting between US$ 18 million to US$ 42, million in annual lost stumpage fee revenues, which is equivalent to 5% of Liberia’s overall 2009 gross domestic product (GDP) of US$ 876 million.

Chainsaw milling can be a dangerous activity, with little formal training available, and at times can lead to substantial waste while generally yielding poor lumber quality. Yet if chainsaw milling is done appropriately, it can have a much lower environmental impact on the surrounding ecosystem through a decrease in skidding and tractor trails. Because of the unregulated and often times illegal nature of chainsaw milling, it is done at night, and when activities are interrupted by authorities, timber is left behind. Both of these situations lead to an inefficient production process that could be made more efficient by effective domestic regulation eventually leading to applying Reduced Impact Logging (RIL) principles in chainsaw milling production.

In the Indonesian context, with a population of 240 million individuals all consuming domestic wood products, there is no oversight or regulation of this large national timber production sector. According to The World Bank, the estimate of the round log volume consumed annually domestically in Indonesia is roughly 10 million m3. Diving further into the data, tropical hardwood prices on average for rough-sawn meranti, bankirai and keruing lumber in Jakarta are approximately US$ 127 m3 yet for legally sourced and produced lumber available in Jakarta, the selling price given onsite data collection at formal sawmills, recovery rates, and transportation costs to Jakarta would have to be at least US$ 273 m3 to be profitable.

In conclusion, most of the roughly 10 million m3 of tropical timber used annually in Indonesia for its domestic 240 million person market is from illegal sources, as described in Chainsaw milling: supplier to local markets.

“As long as the government ignores the need to regulate and sustainably manage the forests that supply wood to the domestic market, Indonesia’s forests will continue to shrink and sustainable forest management will remain an unachievable goal.” 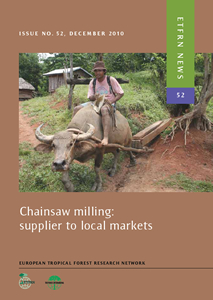