END_OF_DOCUMENT_TOKEN_TO_BE_REPLACED

The following section is a quantitative look at primary forest loss.

More than seven million hectares of primary forest were lost on an annual basis between 2000 and 2005, the most recent period for which data is available from the U.N. Food and Agriculture Organization. Roughly half this loss occurred in Brazil, which is home to the largest extent of tropical forest in the world: the Amazon.

But FAO figures don't include destruction of primary forests in all countries. Notably excluded are Australia, Canada, Democratic Republic of Congo, India, and Venezuela; countries with substantial forestry industries that are logging large areas of old-growth forest (especially in the case of Australia, Canada, and Democratic Republic of Congo). These countries have not reported primary forest data since at least 1990. 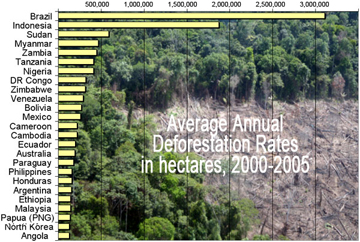 But while primarily forests continue to fall, plantations forests are expanding, especially in North America, Europe and China. Plantations help offset the loss of natural forests in terms of carbon sequestration and as a source for wood products [i.e. "no net forest loss"], but contribute to an overall decline in global biodiversity as single species plantations replace their biologically richer natural counterparts. While most of this conversion is occurring in the tropics, Tasmania (Australia) and the American Southeast — where old-growth forests are being razed to establish pulp, paper, and timber plantations — buck the trend.

Highest average annual deforestation of primary forests, 2000-2005, by area. All countries [in ha]

Most primary forest cover, 2005. All countries