END_OF_DOCUMENT_TOKEN_TO_BE_REPLACED

On Thursday April 26, the Internal Affairs Minister, Hillary Onek, under whose docket the NGOs fall, summoned representatives of the two NGOs to explain an anti-land campaign they are involved in. He wanted to know what land grabbing they are campaigning against and whether it exists in Uganda. 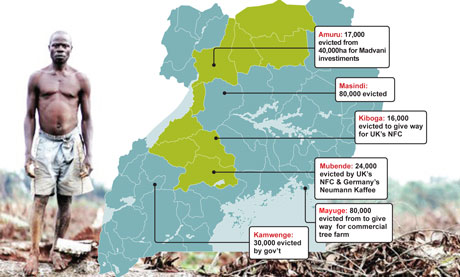 Onek’s summon coincided with the climax of the civil society’s flurry of activities in their week-long campaign against land grabbing.

ULA and Food Rights Alliance (FRA), a consortium of over 60 NGOs advocating for food security as a human right, organised the campaign that attracted activists from as far as Netherlands, local NGOs and the church, to a function at the Uganda Museum in Kampala.  As Onek quizzed representatives of the two NGOs, the rest of their staff were busy erecting tents, and fliers at the venue. One placard read: “Has the government conspired to grab our land?” The activists also delivered a petition to the speaker of parliament and launched a “Land Loser’s Directory”. Groups of land losers from all parts of the country also gave testimonies on how the government has aided the grabbing of their land.

Onek and his Assistant commissioner, Simon Nangilo, sources told The Independent, kicked off a stormy and highly tense meeting at about 10:30 in the ministry’s boardroom and made two demands to the NGOs short of which he said they would be deregistered.

“We were held up in a meeting where we were asked to make a public apology to the people of Uganda and the President for harming his name,” Esther Obaikol, the Executive Director ULA told The Independent, “and that if we don’t we will be deregistered.” An Oxfam official that The Independent approached declined to comment on the matter.

But Obaikol said Oxfam and ULA asked for two weeks to prepare a response. Observers have likened Onek’s utimatum to President Museveni’s previous warnings over the same subject. In the past, the president has threatened to have arrested those that claim that the government is behind land evictions.  Land is a touchy subject and, the activists say, although the President has sanctioned evictions in Kampala, Mubende, Kiboga and Amuru, he cannot take lightly accusations by the NGOs that his government abets land grabbing.

Agnes Kirabo, the FRA Coordinator, says there is no need for any apology to Ugandans or the President and that it is the President himself who should be concerned at the spate of the land grabbing vice considering that it is at the heart of failing his Ten Point Programme.

This is not the first time these NGOs are threatened. Last month, The Independent reported how the Central Bank had launched an investigation in the transactions of Advocates Coalition on Development and Environment (ACODE). Although BOU insisted such checks were not unusual, insiders said the move had been triggered by the NGO’s activism and was an indirect reminder to the organisation that “it could be dealt with”.

In December last year, the RDC Amuru castigated local organisations, Foundation for peace Initiative and Action Aid when they mobilised people to demand for accountability from his office after it emerged that he had only distributed 1500 iron sheets of the 15,000 that government had released. On top of writing to the president, the RDC also said on public radio that the involved organisations were recruiting rebels.

Sources at ULA say that the ministry has in the past investigated their sources of funding and warned them against getting involved with Mubende issues where over 22,000 residents were evicted from their land, their crops destroyed, houses burnt from about 10 villages by security operatives to give way for a plantation forest by UK’s New Forest Company Uganda Limited (NFC) on the orders of President Museveni.

Oxfam and ULA also rattled the government when they released a report indicating that 22,000 were evicted from their land in Mubende. When this reporter travelled to Mubende at the height of the crisis, officials at the Resident District Commissioner’s office which handles the land issues (showing the president direct involvement since RDCs answer mainly to the president) said that Oxfam had done a false report and asked the reporter to go back to Kampala.

Back in Kampala, sources say that the government was at the height of kicking Oxfam or its top officials out of the country.

Oxfam and ULA are now in trouble mainly because following their noise, NFC which President Museveni personally penned a number of letters and deployed his ministers and the army to evict the people and give way for the organization, was force to halt its activities in Uganda after their financiers withheld funding. The financier, which is World Bank’s lending arm, International Finance Corporation (IFC) also tasked its compliance Ombudsman to investigate NFC. The investigations are ongoing.

Unfortunately for Oxfam, the incident had opened another can of worms. The NGO has had the worst brushes with the first lady Janet Museveni in Karamoja, over how to support the Karamojong pastoralists to develop.

“Government cannot romaticise about nomadism as a way of life,” the first lady wrote to the European Union in November 2010, “because it is a danger that we have to fight like we fight all other social ills.”

However, despite tons of money pumped into crop production, activists have deemed the effort fruitless because it is alien to Karamojongs who, with over 2.3 million cattle, know only cattle keeping as their way of life. In many cases, procured cassava cuttings dry up in stores, residents uproot crops before they are ready and others abandon gardens because it is not their way of life.

This disagreement worsened the relationship between activists like Oxfam and Mrs Museveni who looks at the former’s activism as frustrating her efforts.

The latest campaign on land grabbing seems to have sealed the organisations fate especially considering that President Museveni personally allocates land to investors and orders evictions of people in different parts of the country.

Observers say that the stern warning to the NGOs, coming at a time of vigorous activity against land grabbing is an indication that that they are crossing paths of important people in government.

FRA, for instance, invited hundreds of peasants who testified about loss of their land to investors, government and army officials.  The NGOs launched the land losers’ directory on the same day. The book is intended to document all land losers.

They also petitioned the Speaker of parliament with seven demands to be discussed notably; ensuring that the process of acquiring land for investment is transparent and accountable to the rights holders taking into consideration existing power imbalances between different parties.

The NGOs have also lobbied the Church under the Uganda Joint Christian Council that is increasingly asserting itself in governance issues and is believed to wield a lot of power. In a speech, read by Fr. Sylvester Arinaitwe, Archbishop Henry Luke Orombi who is also the council’s chairman castigated “unlawful evictions” that have “resulted into landlessness and suffering by thousands of Ugandans.”

He noted that the situation has been aggravated by two factors—lack of a National Land Policy and the absence of a pro-poor legal regime that delivers justice to the poor in a speedy manner.

Orombi noted: “UJCC welcomes the ongoing initiative by civil society organisations that have brought together ULA, FRA and UJCC whose main aim is to educate Ugandans on their rights and challenge oppressive systems and structures that have led to unlawful eviction of thousands of Ugandans from lands they have occupied for generations.”

The council chairman also demanded that the government revives consultations on land policy, makes the district land tribunals functional, stamps out the culture of impunity, and ensures strict enforcement of existing laws inorder to prevent cruel evictions that have become the order of the day.

Museveni at the heart of evictions

ULA and FRA note that land  grabbing in Uganda has mainly been in form of foreign direct investment—with investors grabbing large chunks of land to grow forests of pine, eucalyptus,  palm oil, sun flower or food; rice, wheat, sugar or coffee among others.

Extractive industry companies also evict people to give way for production of oil, gas, and minerals.

Local elites and army generals are also at the centre of land grabs among others.

At the heart of the NGOs activism are mainly three cases of land grabbing that have attracted public outcry this year in the districts of Amuru, Masindi, Kabarole and Kamwenge.

But a more contentious one that has already pitted activists against President Museveni is the Amaru eviction of over 10,000-17,000 people from Apar into pabbo sub-county. Although president Museveni has in the past threatened to deal with those who claim that government is behind evictions, increasingly, he is personally directing more and more evictions including this one and the evictees themselves are coming out to criticise him.

The President wants over 40,000 hectares given to the Madhivani Group to grow sugarcane. The government claims the land belongs to Madi East Forest Reserve and is, therefore, under the Uganda Wildlife Authority. But residents insist it is their land. Lives have been lost in protests, scores arrested, and property destroyed. Local women have, in the most severe form of protest, stripping naked before the Madhivani officials to no avail. They are now threatening to strip before Museveni. But area courts have ruled in favour of the Madhivanis.

This is not the first time the President is directing massive evictions of people. Under his directive, 22,000 were evicted from the districts of Kiboga and Mubende to give way for UK’s New Forest Company’s pine tree project worth millions of dollars. This eviction occurred ten years after another massive eviction of over 1000 people also directed by the president to give way for a large commercial coffee estate by German’s firm NeuMann Kaffee.

In all these cases, critics have attacked the government for carrying out the evictions brutally, failing to compensate the evictees, and failing to secure them alternative homes. In case of the Mubende evictions, evictees ended up crammed up on the edges of the two commercial estates. Reports indicate that more than half of the people that had been evicted from Apar to Pabbo have defied authorities and returned to the land.

Another controversial eviction is in Kamwenge where FRA notes that 30,000 people are under threat of evictions from 41square miles of land to be gazetted for resettlement of refugees from the DRC.  Letters from the president himself on the matter are cited at the centre of the controversy. The Parliamentary Committee on Presidential Affairs has visited but it is yet to make any recommendations as residents languish in uncertainty.

ULA also cites another eviction of 32 household from 42 acres of land in Masindi district by an individual named Busingye who acquired the land through court compensations.

Apart from these cases, in Bullisa, oil activities by international oil companies Tullow Oil, among others, have also exacerbated land grabbing with up to 700 hectares of land grabbed.  Government has also been directly involved in land conflicts with the residents.

For instance in 2008, a fight over ownership of some eight square miles of land between State House and a group of peasants in Hoima was exposed. Pending the proposed construction of an oil refinery in Hoima, the government has embarked on a land surveying spree that is feared to lead to another spate of massive evictions.

But these are just isolated cases. A mini-survey by The Independent shows that there have been hundreds of evictions and more are pending.

Read further her: World Bank under attack for aiding land grabs in Uganda