END_OF_DOCUMENT_TOKEN_TO_BE_REPLACED

Firms that emit greenhouse gases but also want to help revitalize business in the Tohoku region following the Great East Japan Earthquake are being drawn to participate in a carbon dioxide offset trading scheme.

Under the scheme, entities practicing silviculture through thinning, planting and other means can enter a certification process to claim credits, depending on how much carbon dioxide their forests absorb.

Including prefectural governments, the entities can then sell their credits to other bodies wanting to act on global warming.

The scheme was set up in November 2008 by the Environment Ministry and the Forestry Agency.

So far, 180 projects nationwide have been certified under J-VER. The total amount of carbon dioxide nationwide that can be traded in the form of credits is about 157,000 tons. 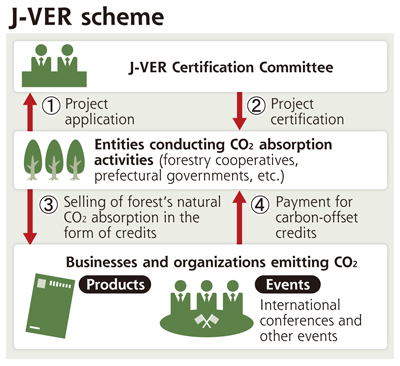 The Kamaishi regional forest cooperative association in Kamaishi City, Iwate Prefecture, has sold nine times as many credits as it did before the earthquake, boosting the scheme's prominence.

"Association members hit by the disaster have been encouraged to revive local forestry because we can earn new profits [through the scheme]," said Yukio Takahashi, an executive of the association.

The association has about 1,700 members. Its office was destroyed in the tsunami following the quake and its head and three other workers died.

The association joined J-VER in 2010 out of a wish to help revitalize local forestry, and requested credit certification for thinning and other projects. In January last year, credits were certified for 4,265 tons of carbon dioxide to be absorbed by forest.

Despite these figures, J-VER gained little public recognition, and had sold credits for only 265 tons of carbon dioxide before the March 11 disaster.

After March 11, however, people began buying credits in bulk, and up to 2,491 tons were sold as of last Sunday. The signing of a contract for another 1,000 tons is almost complete, according to the association.

While the association will not divulge credit prices because they differ depending on individual contracts, the Environment Ministry has said credits are usually priced at 10,000 yen to 20,000 yen per ton. This means the association has earned tens of millions of yen so far.

The Iwate prefectural government began a similar scheme in January last year, and sold credits for 1,514 tons of greenhouse emission absorption by its forests.

The Kitakata municipal government in Fukushima Prefecture has sold all of its 112 tons.

They can also contribute to revitalizing the quake-hit region by buying local credits.

The company says if consumers buy these products, they can indirectly help combat global warming and support the disaster-hit region at the same time.

Toppan Forms Co., a manufacturer of office paper, also from this month began selling postcards and envelopes for corporate use with J-VER credits.

In September, the Environment Ministry set up a conference supporting the scheme to link Iwate, Miyagi and Fukushima prefectures with purchasers and potential buyers of credits.

Many more forests in the Tohoku region can be certified for credit, an official of the ministry's Office of Market Mechanisms said.