END_OF_DOCUMENT_TOKEN_TO_BE_REPLACED

Last year, there seemed to be an unwritten rule in enviro-circles: whenever two or more enviro-folks were gathered together in a place of meeting, talk must turn to biochar.

Accounts would be exchanged of articles half-read and half-digested...the pros would be arrayed against the cons...the words "local" and "sustainable" would be flagged up early and often.

A common reaction was "Good idea, but..."

The notion of biochar takes us back to ancient human civilisations in South America.

The ground remaining when rainforest is cleared isn't very fertile, despite the luxuriant herbage of the forests themselves.

So about 2,500 years ago, people developed what Portuguese settlers later termed terra preta - black earth - created by ploughing carbon into the soil in the form of charcoal.

With ever more hungry mouths on the planet, with soils degrading in many places and with climate change threatening to reduce yields in coming decades, there's renewed interest in the ancient technology, which has been championed by James Lovelock of Gaia fame among others.

The vision put forward is of a world where waste is burned, where some of the heat from that burning is used to transform waste to charcoal, and where the charcoal is ploughed into soil, increasing its capacity to support crops and locking up carbon for centuries, possibly millennia.

The waste that can be used includes spare stuff from plants, such as husks and shells and stems, and even sewage and plastics - pretty much anything based on carbon, in principle.

What's proposed would be nothing less than a revolution in the way we handle waste - turning it from waste into fuel, fertiliser and climate saviour with a single blast of the charcoal oven.

Such grand notions always require quantifying in the cold light of day; and that's what we have this week in the form of a paper in the journal Nature Communications.

A group of researchers that includes Johannes Lehmann of Cornell University, the closest thing biochar has to a spiritual father, has attempted to calculate just how much impact the technology could have on climate change if societies all over the world transformed their waste streams into biochar production facilities - "the maximum sustainable technical potential of biochar to mitigate climate change".

Their answer is a large number - 1.8 gigatonnes of carbon emissions, or about 12% of humanity's total, per year.

But there are negatives. Using plant waste this way means you couldn't simply burn it for fuel, reducing the world's biomass potential; and there are the carbon costs of transporting it and processing it and such like.

Putting all the numbers together gives the 1.8Gt figure, with an added but unquantified benefit through a presumed impact agricultural yields, especially in poorer parts of the world where the need for food is likely to become even more acute as the years go by.

Put in these terms, you might ask why we aren't doing it already. On the surface, biochar is a win-win-win technology: a win for the climate, a win for food production, and a win for reduction of the human waste stream.

Some of the caveats will be familiar to anyone who's followed the biofuels issue down the years.

Depending on where and how you do it, it can produce more carbon than it saves. And if you simply grew stuff to produce biochar, the carbon economics would be turned on their head, just as they are if old-growth forest is stripped for biofuel plantations.

There are also concerns about who would own and control biochar production and use, if it were to become the subject of a global, high-level political push - just as there is with geo-engineering and again with biofuels.

But the biggest hurdle to the widespread implementation of biochar is the economics would have to be right in each part of the world - not the carbon economics so much as the economic economics.

A study released earlier this year found that all kinds of factors affect this issue, including whether sending the stuff to biochar facilities would be cheaper or more expensive than how waste is dealt with now.

Currently biochar isn't something that can win money from carbon offset schemes. And just as with biofuel and biomass, the amount of money that should be issued would vary widely between locations, technologies and types of waste used, just as the amount of carbon storage varies.

Biochar is already a good idea in many peoples' books. What this paper does is to help sort out just how good it is, and where it sits in relation for example to biomass burning.

But the fact that it can take away a slice of global emissions isn't enough to ensure its adoption.

After all, pretty much everyone involved in Redd (Reducing Emissions from Deforestation and forest Degradation) thinks that is a good idea, but we still don't have a global system for making it happen.

Energy efficiency is a good idea even from the simple standpoint that it will save you money. But not everyone practises it - even your humble correspondent is impeachable in that regard. 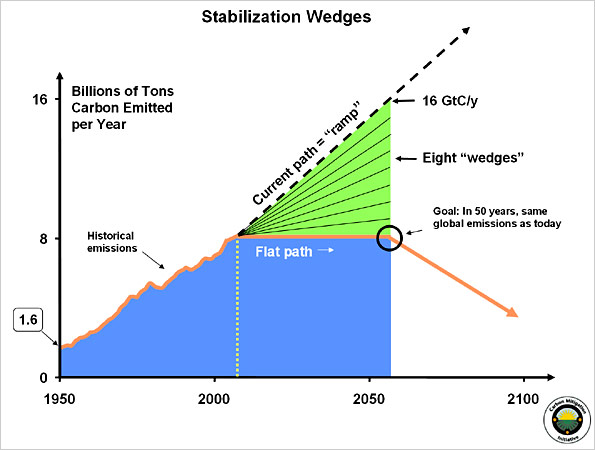 From a strictly carbon-saving point of view, biochar can now be added as a new wedge to the Stabilisation Wedge concept developed by Stephen Pacala and Robert Socolow.

They're all quantified, and most are technically achievable with today's technology. But it doesn't mean they will be; and the same, for all its Amazonian roots and win-win-win potential, is true of biochar.