END_OF_DOCUMENT_TOKEN_TO_BE_REPLACED

Georgetown  - Jan. 12, 2010 -- Climate change is certainly becoming one of the defining issues of the 21st century and as such, more and more countries are becoming aware of its devastating effects, the importance of standing forests and the role tropical forests can play in its mitigation.  The issue of mitigation was brought to the fore today at the signing ceremony for a collaborative project between the Government of Guyana and Conservation International (CI) with financial support from the Kreditanstalt fur Wiederaufbau (KfW) Bank. The signing ceremony was held at Duke Lodge, Kingston.

KfW is a German Government owned development Bank based in Frankfurt, Germany. The financing is related to the role Guyana has been playing in highlighting Climate change mitigation through its Low Carbon Development Strategy (LCDS). Minister of Agriculture Robert Persaud noted that the project which is timely is in recognition of the work Guyana has been doing in climate change mitigation and how the country utilizes its rain forest.

He posited that the project is very significant and valuable in terms of furthering the initiatives that Guyana has already undertaken in many areas in relation to its readiness proposals under the framework of the World Bank.

“We were one of the first countries to have our proposal accepted under the World Bank’s Carbon Facility, the memorandum of understanding we have with the Kingdom of Norway and also the wider framework within the Low Carbon Development Strategy.”

The Minister added that society should recognize the advocacy and leadership role the country has been playing in terms of recognizing the values of standing forest and the need for binding incentives in the post -Kyoto framework.

“Standing forest must be recognized and I think that is one of the positive and enduring features coming out of the Copenhagen talks as it relates to Guyana and that gives us a sense of reward because of the hard work we have been doing over the last two years in terms of getting the international community to recognize the importance of standing forest and the role tropical forest can play.” Minister Persaud said. He added that the project represents the growing international collaboration and support Guyana has been able to develop. 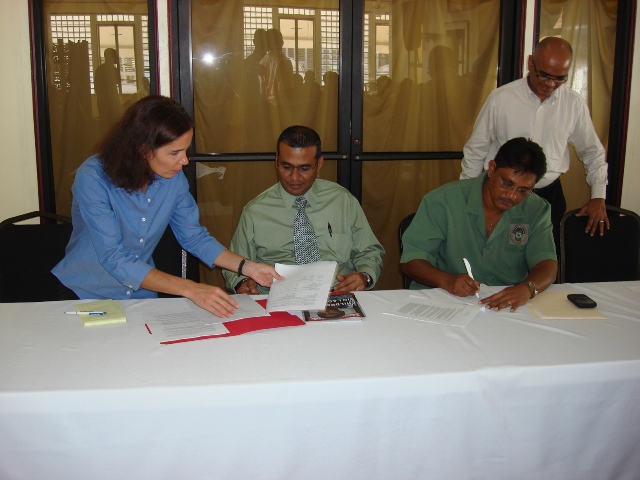 CI’s Vice President, Lisa Famolare who is responsible for conservation policy and strategy said that the project is linked to the Guyana Government’s initiative on Climate change and READ and the way the country has taken a lead on the promotion of low deforestation. “I laud the leaders of Guyana on the role they are playing, they are definitely in the position of leadership globally on climate change and I want to congratulate the Government on the Low Carbon Development Strategy,” Famolare said.

She added that the collaborative programme between CI and the Government of Guyana through the Guyana Forestry Commission is a great initiative and the beginning of a long partnership on climate change mitigation and protected areas development and carbon reserves. The agreement for the US$700,000 project titled “Avoided Deforestation through Consolidation and Creation of Protected Areas and Carbon Financing Mechanism in the Guianan Region” was signed by Famolare and Singh on behalf of the Government of Guyana.