END_OF_DOCUMENT_TOKEN_TO_BE_REPLACED

Neither forests nor trees

The current political disarray is resulting in calamitous deforestation across the country, and threatens to roll back Nepal's internationally acclaimed community forestry success story.

Smugglers in cahoots with government officials, police, and members of forestry user groups are responsible for heavy denudation in 25 hotspots in 16 districts. Trees are being cleared by illegal loggers or squatters settled in government forests by political parties. 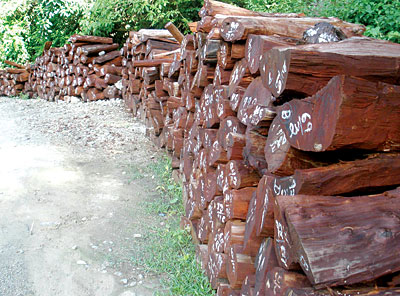 More than 30,000 hectares have been decimated in the past year alone, and the country has lost three per cent of its forest cover in the unstable political climate since the end of the conflict, mostly in the Tarai. Environmentalists say the country needs at least 40 per cent forest cover to maintain ecological balance, but this has now fallen to about 25 per cent.

"The key to protecting what is left of the forests in this country is to have integrity in the leadership of the administration," says former secretary of the Ministry of Forestry, Uday Sharma. One indication of the anarchy in the forestry sector is that even though it has been the practice to ban all logging for four monsoon months, this year the cabinet reduced that period by half so more trees could be cut. Government-sponsored logging has got worse since the RPP's Deepak Bohara became Minister for Forests, following which he handpicked his own secretary, director general and District Forest Officers (DFOs).

Former secretary at the Ministry of Forests, Keshab Kandel, says the DFOs' role is critical in whether a forest is saved or destroyed. "The DFOs, police, civil servants, contractors, and some members of community forests are involved in the accelerated deforestation we see today," says Kandel, "and the DFOs and contractors in particular have an inside track right up to the ministry and minister in Kathmandu."

Most of Nepal's Tarai forests have been victims of political patronage since the Rana days. During the Panchayat years, the country's forest cover dropped from 45 per cent in 1965 to 29 per cent in 1980, mainly due to government sponsored transmigration from the hills to the plains. The Department of Forest's own survey shows that up to 100,000 hectares of forest along the East-West Highway have been encroached since 1990. The deforestation got worse during the war years and in the fluid transitional period since the conflict ended in 2006. Dadeldhura and Salyan, for instance, lost huge tracts of native forests during the war.

The Maoists are responsible for settling thousands of families in government forests in Dhanusha, Sindhuli, Mahottari, Udayapur, Kapilbastu, Dang, and Kailali. In Dang, the Maoists gave each family four katthas of land.

Meanwhile, in Bara, Parsa, Rautahat, and Sarlahi, smugglers have carted off hundreds of tractor-loads of valuable hardwood timber across the border into India. Rautahat has lost 25 per cent of the sal forests in its northern region. In the Indian town of Ghodasan, there are signs that say in Hindi: 'Nepali Hardwood Timber Sold Here'.

The deforestation is now not just restricted to the Tarai. Hill districts have also suffered because of the corruption and politics that have seeped into community forestry user groups. National forests are being cut down in the hill districts of Panchthar, Kaski, Surkhet, Doti, and Dadeldhura. Community forests where user groups have been set up but don't yet have control of the resource, forests in charge of user groups that have not yet been registered, and those that are controlled by corrupt local political groups have suffered most.

Former president of the Federation of Community Forest User Groups (FECOFUN), Ghanashyam Pandey, says the districts where community forests have been least effective are Sarlahi, Udayapur and Kailali. "But in general, it is the government managed or owned forests where the deforestation has been most serious," he says.

In October, the government set up a team to investigate deforestation, headed by former forest ministry bureaucrat, Sushil Bhattarai. The Centre for the Abuse of Authority (CIAA) has named 14 DFOs as being involved in deforestation, but nothing has happened to them. Another team recommended action against the former director general of the Department of Forests, Madhav Acharya, but his resignation has still not been accepted.

Which is why not much is expected from yet another investigation committee set up by the cabinet, headed by former head of the Appellate Court, Govinda Parajuli, and former forestry bureaucrats. The team has been given three months to come up with a report.