END_OF_DOCUMENT_TOKEN_TO_BE_REPLACED

State of the Voluntary Carbon Markets 2011

For five years, Forest Trends’ Ecosystem Marketplace and Bloomberg New Energy Finance have published the State of the Voluntary Carbon Markets Reports to shed light on trading volumes, credit prices, project types, locations, and the motivations of buyers in this market. Every year’s marketplace seems more complex than the one before, as actors continually refine their programs, businesses, and investments in search of a more perfect future – for their projects and the planet.

In 2010, suppliers that weathered the previous year’s storm of political and economic uncertainty and transacted the largest market-wide volumes (131 MtCO2e) ever tracked in this report series.  Success was built on a refined understanding of what turns the markets on or off.

Many voluntary buyers continued their offsetting commitments – or made new ones – after reclaiming their CSR (Corporate Social Responsibility) dollars from the recession. New buyers took the “tried-and-true” approach to investments in project types like renewable energy and with a focus on sustainable development. For other offset backers the future was in the forests. The lungs of the earth breathed life into the voluntary market in 2010 when project developers were given new tools to unlock forestry’s potential as a large-scale climate solution. The Global South took some ownership of these trends as governments, foundations, and buyers built local markets to foster domestic development and trades.

The year of 2010 was a bumpy ride for suppliers in the US, where the federal government’s inability to reach a climate solution hastened the closure of the Chicago Climate Exchange (CCX) as well as several state-side trading desks. It also turned up the heat on regional markets like the emerging compliance programs in California and the Western Climate Initiative. Both of these impending markets stood as beacons for those suppliers generating pre-compliance credits.

Embracing the mantra of “what doesn’t kill us makes us stronger,” the market infrastructure turned recent years’ political and economic unknowns to their advantage. Seeing that corporate and citizen consumers were willing and able to carry the climate action torch, standards began to trial approaches to scale up their “most wanted” locally-based projects. Registries built new partnerships, alliances, and even sub-national registries in an effort to share both the risks and rewards of shifting market dynamics. In these and many other ways, suppliers of market infrastructure and carbon credits looked back on recent lessons learned to plot a future market that they hope remains resilient to change. 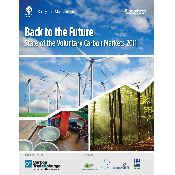