END_OF_DOCUMENT_TOKEN_TO_BE_REPLACED

The author of the Peeping Tom column in Kaieteur News on Sunday 26 April 2015 (‘The Chinese are not the problem’) complained about the high domestic price of greenheart sawnwood, which he/she thought was the cause of the shift from traditional wooden to concrete houses in the coastland.

The author attributed the price of US$638/m3 (G$300 per Board Measure, 1/12th of a cubic foot) to the inefficiency of the family-sized Guyanese-owned timber processors and their inability to form consortia to compete with modern companies exemplified by the tax-assisted Chinese transnational loggers.

US$636/m3 as a domestic price is the same as the lowest grade of rough-sawn export lumber (‘merchantable’) declared by the Guyana Forestry Commission to the fortnightly Tropical Timber Market report of the International Tropical Timber Organization for the last fortnight of March 2015, while the premium grade of rough-sawn export lumber (‘prime’) was selling for twice the price – US$1236/m3. These figures conform to economic theory; the best grades and highest price go to the market which can transform the lumber most profitably into even more valuable products such as furniture, with a multiplier factor of 14 or more compared with the price of the unprocessed log.

There seem to be three questions:

Q1 – Can we continue to supply to the export market our excellent sawn timber properly priced and appropriately taxed?

Q2 – If we continue to send our best timber overseas for value-added processing, how do we satisfy the local market?

Q3 – Instead of having our timber improved in value by overseas processing, could we add value domestically and sell more processed products in the export market?

In this letter, I address Q1 – continuity of supply.

Our approved National Forest Policy (1997) and National Forest Plan (2001), both revised in 2011 but not approved by the National Assembly, and the GFC Code of Practice on Timber Harvesting (1996/2002/2014), promote and require a sustained supply of forest products. Sufficient seed-bearing trees of each commercially desirable species should be retained in all logged forests to ensure the survival of those species in those same areas.

In contrast, it has been evident for years that the Guyana Forestry Commission’s casual approach to the required conservation of individual species among our 1000+ tree species has been allowing massive over-harvesting of the commercially-preferred timbers.

The accompanying table shows that there is still a tremendous concentration for the export market on a very limited number of tree species. Unlike the practice in Suriname, the GFC only provides aggregate (total) volumes of log and lumber production and exports; it does not disclose any information by species or concession. In consequence we only have the information disclosed to the ‘annual review and assessment of the world timber situation’ produced by the International Tropical Timber Organization (ITTO) although that review is always some years out of date. 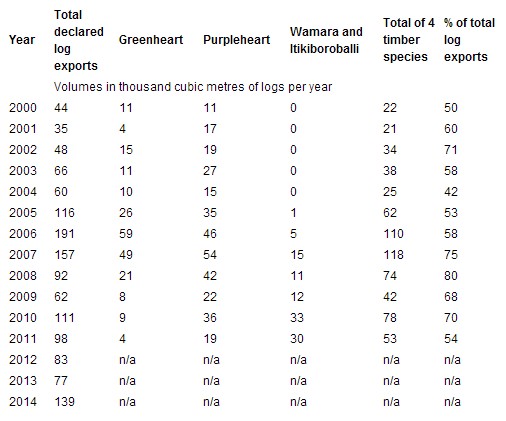 The figures in the table show two marked trends: firstly, the trend of forest degradation is evident in the rise and fall in exports of commercially desirable timbers. Guyana’s iconic species – greenheart, purpleheart and more recently, wamara (and itikiboroballi) – are overharvested, and are extinct or approaching commercial extinction in accessible forests. The ratio of their log volumes to total log volumes far exceeds the ratio of the volumes of the standing trees in the forest to total forest volume.

Secondly, these four species together comprised more than 50 per cent of total log exports in all but one year (2004), and more than two-thirds of all log exports between 2007 and 2010.

The remarkably large difference between the declared FOB prices for logs exported from Guyana compared with the declared CIF prices for the same or similar timbers landed in China and India is conventionally a signal of transfer pricing. This practice involves incorrect Customs declarations and indicates collusion by the GFC and the Guyana Revenue Authority.

In addition, taxes for our excellent timbers are notably much less than for equivalent timbers in Malaysia.   So the answers to Q1 are that harvesting is excessive and unsustainable, pricing is wrong and taxes are too low.

Corroboration about Customs fraud is in the report on ‘Illicit financial flows from developing countries: 2003-2012’ from the Washington-based Global Financial Integrity (December 2014). These flows are estimated for Guyana at US$ 84 million in 2003 rising almost continuously to US$ 440 million in 2012. Around half of the illicit flows (US$ 1464 million for 2003-2012) are attributed to export under-invoicing.

The Asian log exporters will continue to cream Guyana’s fragile forests of commercially desirable species until the last tree is harvested. They are supported in their quest by the explicit statements of the President (KN, 28 August 2014, ‘President Ramotar condemns “attacks” on Chinese investment’), the Minister of Natural Resources and the Environment (SN, 6 September 2014, ‘Natural Resources Minister blames energy cost for lack of value-added forestry’) and the GFC (Guyana Forestry Commission’s Fact Sheet on Forest Management – debunking misrepresentation. Part 2. 16 August 2014; accessed on Ministry of Natural Resources and the Environment’s website on 17 September 2014).

I will address questions 2 and 3 in subsequent letters.