END_OF_DOCUMENT_TOKEN_TO_BE_REPLACED

Carbon accounting used in the Kyoto Protocol and other climate legislation currently neglects CO2 emissions from the production of biofuels, a loophole that could drive large-scale destruction of tropical forests and exacerbate global warming, warned researchers writing last week in the journal Science.

Jerry Melillo and a dozen co-authors noted that the Kyoto Protocol, the European Union's cap-and-trade law, and the American Clean Energy and Security Act all fail to account for emissions resulting from production and use of biofuels. Instead the carbon accounting systems erroneously assume that biofuel production is carbon neutral. In reality, establishing bioenergy crops in place of carbon-dense ecosystems like tropical rainforests and peatlands results in substantial greenhouse gas emissions.

"When forests or other plants are harvested for bioenergy, the resulting carbon release must be counted either as land-use emissions or energy emissions," said Melillo in a statement. "If this is not done, the use of bioenergy will contribute to our greenhouse gas problem rather than help to solve it."

The authors urge policymakers to fix the the accounting flaw by establishing a system that counts all emissions, whether from fossil fuels or bioenergy. They system should also include other greenhouse gas emissions associated with bioenergy production and use, like methane and nitrous oxide.

"Bioenergy has the potential to provide a substantial amount of energy and help nations meet greenhouse caps, but correct accounting must be in place to prevent unintended consequences of unsustainable bioenergy production," said Melillo.

"As we approach the most important climate treaty negotiations in history, it is vital that technologies, such as biofuels, that are proposed as solutions to global warming, are properly evaluated," said co-author Daniel Kammen, a University of California, Berkeley, professor of energy and resources and of public policy. "Our paper builds on recent work on the direct and indirect land use impacts of biofuels, and clarifies how the accounting should be done."

Smart biofuels that don't hurt people or the environment are possible

Sustainable biofuels can be a reality but only in combination with reductions in fuel demand and increased productivity on existing agricultural lands, argue researchers writing in the journal Science.

Five years ago biofuels were seen as a panacea for the world's energy hunger and the need to address climate change, but increased production of biofuels soon contributed to a clutch of problems, including competition with food, resulting in rising prices, and large-scale conversion of rainforests and tropical grasslands for feedstocks, resulting in biodiversity loss and increased greenhouse gas emissions. Environmentalists and scientists condemned many biofuels — including ethanol produced from Midwestern corn ethanol and biodiesel generated from European rapeseed and Southeast Asian palm oil — as a short-sighted energy solution. Some biofuels were found to be even worse for the environment, and more costly, than conventional gasoline.

However some researchers remain optimistic that smart biofuel production could help meet energy demand without hurting people or the planet. In a Science Policy Forum piece, David Tilman and colleagues explore some of these options, noting that biofuels can be produced in substantial quantities at low environmental cost provided they are derived from feedstocks that have lower greenhouse gas emissions than conventional energy sources and don't compete with food production. The authors highlight several potential feedstocks, including perennial plants grown on degraded and abandoned agricultural land; crop residues; sustainably harvested wood and forest residues; double crops and mixed cropping systems to maximize production between and during harvest cycles; and municipal and industrial waste.

But use of these biomass sources may not emerge on its own, note the authors, who lament that recent biofuels policy dialogue in the United States has become "increasingly polarized" with political influence seeming to trump science.

"The best available science, continually updated, should be used to evaluate the extent to which various biofuels achieve their multiple objectives, and policy should reward achievement," they write.

To this end, Tilman and colleagues suggest three steps to be taken: "meaningful science-based environmental safeguards should be adopted, a robust biofuels industry should be enabled, and those who have invested in first-generation biofuels should have a viable path forward."

Such policy should be supported by "rigorous" accounting rules that "measure the impacts of biofuels on the efficiency of the global food system, greenhouse-gas emissions, soil fertility, water quality, and biodiversity. Accounting rules should consider the full life cycle of biofuels production, transformation, and combustion."

Without such safeguards, "the massive projected increases in global energy and food consumption will greatly elevate atmospheric greenhouse gas levels from fossil fuel combustion, land clearing, and livestock production and will create immense biodiversity loss from habitat destruction and climate change," the authors warn. "The quality of human life will be compromised."

The British government should end subsidies for biofuels and instead use the funds to slow destruction of rainforests and tropical peatlands argues a new report issued by a U.K.-based think tank.

The study, titled "The Root of the Matter" and published by Policy Exchange, says that "avoided deforestation" would be a more cost-effective way to address climate change, since land use change generates more emissions than the entire global transport sector and offers ancillary benefits including important ecosystem services.

"Preventing deforestation, promoting afforestation/reforestation and stopping peatland destruction are some of the cheapest and most effective ways of reducing global greenhouse gas (GHG) emissions," the authors write. "We propose the introduction of market mechanisms that can ensure investment is directed into these areas and a strategy to make this happen as quickly as possible."

"The prevention of deforestation and peatland destruction requires no technological development and little capital investment. This method of reducing GHG emissions is dramatically cheaper than all other mitigation technologies currently available—as low as US$0.1 per tonne of CO2," they continue.

The economics is startling — if developed countries spent the same amount of money on preventing deforestation and the destruction of peatlands as they do on biofuel subsidies (US$15 billion), this would halve the total costs of tackling climate change. In addition to this, the protection of these habitats yields a plethora of valuable eco-system services, particularly in the poorest countries." 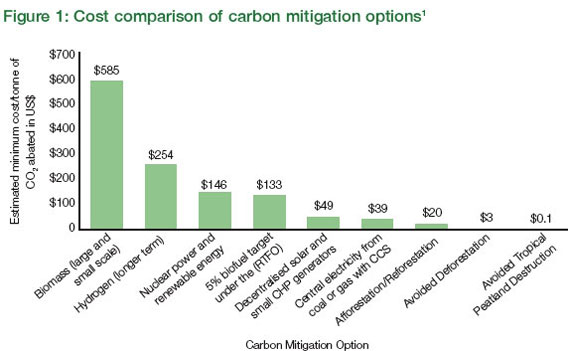 The report says that despite the benefits and the low costs, British government policy does not place any value on protecting forests and peatlands. Arguing that this is a mistake, the authors recommend a series of policy actions.

First and foremost, the report urges the British government to abandon its targets and subsidies for biofuels. Not only do biofuels distort food markets, they promote destruction of tropical forests and peatlands, resulting in greenhouse emissions. Further, biofuels are a costly and ineffective means for fighting climate change. The authors demonstrate this by comparing the cost and the emissions savings between potential avoided deforestation mechanisms and the U.K. government's Renewable Transport Fuel Obligation. They find that the biofuel initiative will save 2.6-3 million tons of carbon dioxide per year at a cost of £550 million ($1 billion), while a similar investment in preventing deforestation and peatland destruction could result in avoided emissions of 40-200 million tons of CO2 per year or a 50 times greater amount of avoided emissions. The savings would be equivalent to 37 percent of all UK carbon dioxide emissions for 2005.

Beyond a moratorium on incentives for biofuels, the authors recommend supporting efforts to reduce peatland destruction in Southeast Asia, especially Indonesia, where large tracts of peatlands are being drained and cleared for the establishment of oil palm plantations. The authors say that because of the high levels of carbon storage in peatlands, reducing their destruction is "one of the lowest-hanging fruits of climate change mitigation." The U.K. should exert political pressure on the drivers of deforestation while simultaneously offering financial carrots for reducing destruction. The report calls on the government to support capacity building — through financial support and technology transfer — in developing countries to prepare for avoided deforestation as well as seed-funding for pilot projects. The authors urge the establishment of a forest carbon market that would provide a "realistic price" for carbon that fully values the ecosystem services provided by healthy forests and provides a financing mechanism for conservation measures. The authors say credits should be generated both by reforestation and reducing deforestation and degradation and asks the British government to push for an international agreement that recognizes the role of avoided deforestation in future climate change mitigation.

"In the UK we can dramatically increase funding for forest and peatland projects domestically and with key partners, especially in Southeast Asia, as well as lobbying at an international level for the right global policies," Ben Caldecott, editor of the report, was quoted as saying by BBC News. "All this can be done within our current budget, by ending wasteful and damaging biofuel subsidies."

Biofuels can reduce emissions, but not when grown in place of rainforests

The new research looks at the "carbon payback time" or "carbon debt" of various biofuel feedstocks including oil palm, sugar cane, and soy. Carbon payback time refers to the number of years it takes for the emissions saved by the replacement of fossil fuels with biofuel to offset the carbon emissions generated when the land is converted for growing the biofuel feedstock.

Analyzing the carbon debt for biofuel crops grown in ecosystems around the world, Holly Gibbs and colleagues report that "while expansion of biofuels into productive tropical ecosystems will always lead to net carbon emissions for decades to centuries... [expansion] into degraded or already cultivated land will provide almost immediate carbon savings." The results suggest that under the right conditions, biofuels could be part of the effort to reduce humanity's carbon footprint.

"Cutting down rainforests to grow biofuel crops will likely never be a winning proposition for climate change or the environment, even considering projected improvements in agricultural and energy technology," said Gibbs, a PhD candidate at the University of Wisconsin-Madison and lead author of the study. "Sustainable production of agricultural biofuels on degraded lands that are unsuitable for food production could provide immediate environmental benefits."

"We're not saying that biofuels are a bad idea," added Jonathan Foley, a co-author on the study and a professor at the University of Wisconsin-Madison's Nelson Institute for Environmental Studies. "This study just indicates that biofuel production should not be occurring at the expense of tropical forests. Other ways of producing biofuels in the tropics — on degraded lands, former agricultural areas and so on — are clearly possible, and could have tremendous environmental, economic and social benefits."

Building on earlier research showing the carbon payback time of biofuel crops grown on certain types of land, the new study uses "a new, geographically detailed database of crop locations and yields, along with updated vegetation and soil biomass estimates, to provide carbon payback estimates that are more regionally specific than those in previous studies," write the authors. "We also estimate carbon payback times under different scenarios of future crop yields, biofuel technologies, and petroleum sources."

The researchers find that annual biofuel crops, including soybeans, maize (corn) and sorghum, have the worst carbon balance and the longest carbon payback times. Woody plantations crops like oil palm and coconut rate much better, although their advantages are reduced when they are grown in place of carbon-rich tropical rainforests and peat lands. Sugarcane scores well when grown on degraded and abandoned croplands due to its high efficiency as a feedstock for ethanol, but again, as in all cases, its carbon payback time surges when its cultivation replaces tropical forest or savanna. Overall the researchers note that "converting tropical rainforests requires ~30-300 years for carbon payback for all feedstock crops, even when accounting for these major changes in energy and agricultural technology."

"No foreseeable changes in agricultural or energy technology will be able to achieve meaningful carbon benefits if crop-based biofuels are produced at the expense of tropical forests," concluded Gibbs.