END_OF_DOCUMENT_TOKEN_TO_BE_REPLACED

"As a non-partisan analysis, the Little Forest Finance Book does not favour one proposal over another. We do hope, however, that our work will aid understanding and encourage collaborative dialogue on this vitally important area of research."

On page 98 we can read the following interesting sentences:

"The extraction of wood comprises 4% of global GDP (Butler, 2012) and causes around two-thirds of tropical deforestation (Geist & Lambin, 2001). Wood is extracted for timber production, fuelwood and charcoal production.

Fuelwood is used on a daily basis by up to 1.4 billion people living in tropical forest countries. This demand is a large source of deforestation and degradation, especially in sub-Saharan Africa. Deforestation for wood extraction is also driven by international demand for timber. This demand drives an illegal market for timber, with as much as 30% of globally traded hardwood timber and plywood described as of “suspicious origin” (American Forest & Paper Association, 2004). In some countries, up to 90% of logging is illegal under existing laws (The World Bank, 2012)."

One should always be rather skeptical when (e)NGOs name studies made by themselves as a "non-partisan" analysis.

Let us analyze the text mentioned above in more detail:

The World Bank report mentioned by the Authors is also doing so - read further here...

Another recent example of deceptive campaigning is the new campaign initiated by FERN:

Here is a slide taken out of one of the six presentations: 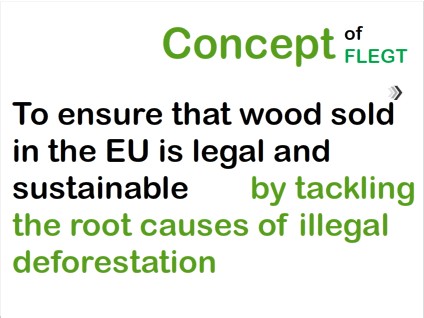 And EU is fighting the root causes of "illegal deforestation" by controlling timber trade!

As of now there is evidence based knowledge that deforestation is a problem of land use change towards agricultural land.

This is just the same as someone wants to tackle a cockroach pest by introducing cats...

You might read further here: REDD+, deforestation and illegal logging - how do these things fit toegether?

In an user response to Peter Holmgren's article "Determining deforestation and Deforestation as the determinant" a visitor comment got the heart of the matter:

Greenies (environmental NGOs) have put all of their effort in campaigning to make deforestation a problem of forestry. There is evidence for this everywhere (e.g. http://forestindustries.eu/content/deceptive-campaigning-environmental-ngos-still-ongoing). And they have been quite successful.
CBD & Co do not have any interest in arguing agriculture as the main driver of deforestation – even if it’s a matter of fact. Why? Because conservation of forests is a very important business area to all of these greenies. From the cost perspective it is much cheaper (and even much simpler) to blame forestry (= logging = chopping trees down) for pushing conservation as to blame agriculture…