END_OF_DOCUMENT_TOKEN_TO_BE_REPLACED

October 2015: The Guardian simply ignores knowledge related to illegal logging and deforestation and furthermore isn't addressing the core problem of the EU FLEGT/EUTR/VPA initiative. Seems the just ongoing evaluation of the FLEGT/VPA/EUTR initiative will also not address the core problem and will just address the mismanagement of the process. There is still no political will to end this disingenuous campaign...

September/October 2012 - a note by the Editor of ForestIndustries.EU: We wrote this article more than two years ago. Many significant events happened since then and a huge amount of new knowledge has been collected by the global community.

But two main facts we stated back in 2010 had been proofed rock steady and all right: conservation should NOT be the main deal of any program for forests and illegal logging is NOT the main source of deforestation - recently published knowledge proves us right: Evidence-based Conservation, by Terry C.H. Sunderland (CIFOR Article here) and Agriculture Is the Direct Driver for Worldwide Deforestation (PDF here or here). Another publication proofs our article right as well: An assessment of deforestation and forest degradation drivers in developing countries (IOPScience; PDF).

Another interesting article was just published by NewScientists arguing "How the mafia is destroying the rainforests". In this article there is a link to a brand new UNEP report  titled "Green Carbon, Black Trade". Unsurprisingly "control of international timber trade" is seen as just a minor and negligible factor to combat illegal logging...

A recent article which nails our statements down (January/February 2013)

We argue that forest frontier colonization by smallholder farmer migrants may continue to be the main proximate cause of deforestation—especially of old-growth forests of high biodiversity and ecological integrity—exceeding the amount of intact forest conversion caused by the more popular culprits, commercial logging and capital-intensive industrial agricultural operations. Because there are no regional-scale data on the proportion of Latin American migration that is rural-to-rural or on the amount of deforestation caused by these migrants, we present several points and provide examples of migrant-induced deforestation in Guatemala to describe how smallholder migrant farmers may represent the largest proximate driver of deforestation in Latin America, and possibly worldwide. This argument is not new; it is a claim posited by researchers with some assertion as recently as the 1990s.13,14 But the position has lost traction in recent years with the dramatic increase in large-scale global commodity-driven farming operations.

August 2013 - the EU published a new study: on the impacts of EU consumption on deforestation: 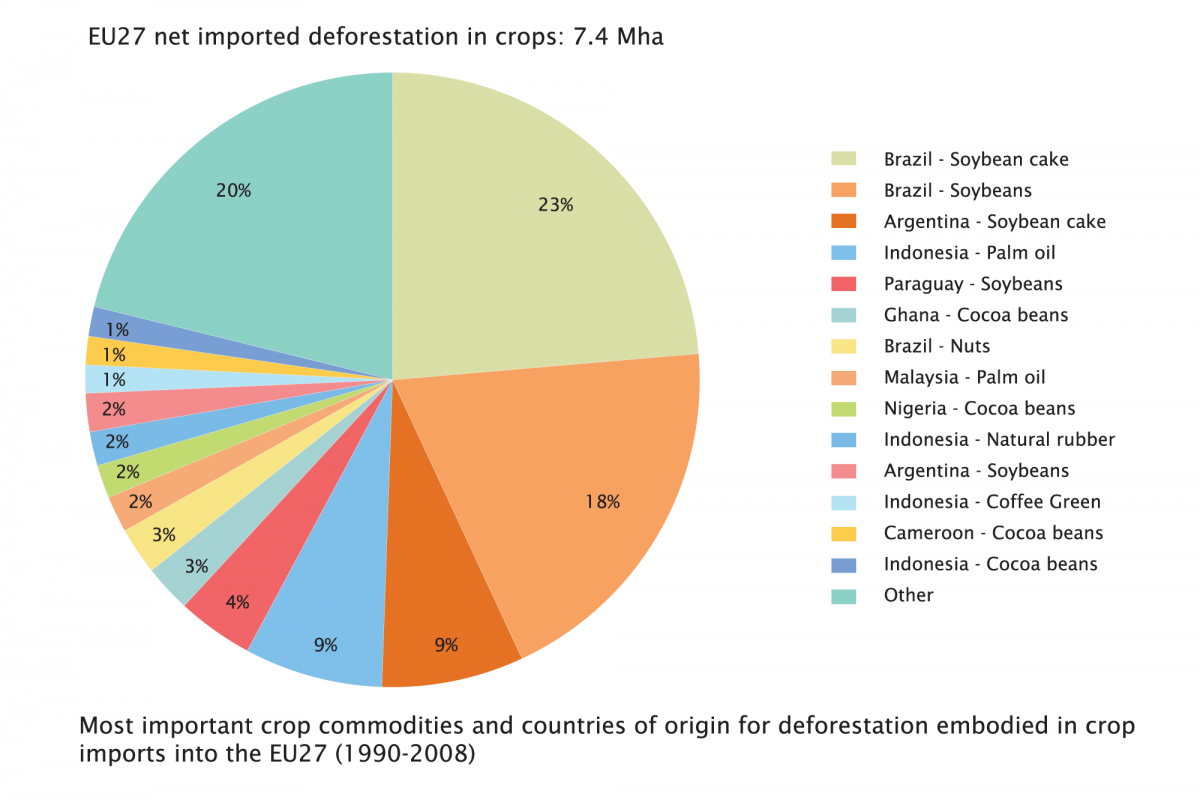 At page 49 of the main report one can read:

"Of the 132 Mha (55%) of deforestation linked to global production of agricultural and forestry products, only 4.5 Mha (2%) of deforestation was attributed to logging. In this analysis, however, only the impact of logging which precedes conversion into agricultural land has been taken into account. The methodology does not attribute deforestation to logging directly, because only sustainable forest management practices are recorded in the FAOSTAT figures and illegal practices are not. This main look as an important limitation to the reader. In this context it should be mentioned that the scope of the study is limited to deforestation and does not include forest degradation. The impact of wood consumption goes beyond deforestation and has an impact on forest degradation.
Additionally, within the overall impact of the agricultural sector (128 Mha or 53%), 69 Mha (29%) of forests were directly or indirectly cleared for cropland to meet the global human demand for food, feed for livestock, fuel and fibres from crops.About 58 Mha (24%) of forests were cleared for pastures to raise livestock."

You may consider to read the full article...

Read further our statement, which we wrote back in 2010 - three(sic!) years before...

July, 19, 2010 - The EU (the European Parliament) has approved legislation which prohibits the sale of timber logged illegally under the rules of the country of origin. In addition, companies must use a system of 'due diligence' to ascertain that the timber they sell in the EU was harvested legally. The European Council has already agreed to support the legislation and is expected to formally adopt it in September 2010.

What is, by its core intention, a good cause.  A lot of eNGOs, news media and others applauded. We do as well.

Nevertheless, the way how EU is communicating this latest attainment is quite questionable. But let’s start at the beginning of the path:
From the very first beginning when EU started to take care of illegal logging presentation of the whole issue was inconsistent

Meanwhile EU granted a lot of European tax money to EFI to support the European bureaucracy and the European Parliament in development of the new Voluntary Partnership Agreements (VPA) and the system of Timber Due Diligence. The same time ForestIndustries.EU started its information campaign on reliable illegal logging communication.

The next time when the EU published information about FLEGT the communication was changed slightly but was still fundamentally misleading. This time honorable EFI was in duty to support the EU in publishing illegal timber trade facts. These facts were taken to conceal the real dimension of the EU FLEGT activity.

The preliminary final chapter was opened these days, when EU published a Q&A regarding FLEGT, VPA’s, Illegal logging, Deforestation and REDD+: (PDF)

Within this article we get informed by EU that the drivers of deforestation and illegal logging are pretty the same:

The governance and market failures which drive illegal logging are much the same as those that drive deforestation. The constraints to tackling deforestation are the same as those we face in tackling illegal logging: unclear and contested tenure of land and forests, lack of institutional capability, weak regulatory capacity, and corruption. FLEGT and REDD both require multi-stakeholder processes that build a shared commitment; systems for monitoring, reporting and verification that are credible; buyers who have confidence in the products they are paying for. Thus, key to tackling deforestation is establishing good governance and FLEGT can help to achieve this.

The real drivers of deforestation and illegal logging (based on globally accepted facts) are:

Disclaimer: We fully support any activity to stop illegal logging and we are against any unsustainable land use or land use change. But we are in the oppinion that every campaing must be honestly, reliable and has to bring the real facts on the table. We think this was not done in the case described above...

The European Union (EU) isn't able (or willing) to get the idea of Forests issues...