END_OF_DOCUMENT_TOKEN_TO_BE_REPLACED

The tiny global minority residing in rural frontier areas—how long people remain there; the timing, magnitude, and characteristics of their consumption; and their demographic transitions—promises a vast impact on future tropical deforestation. It is here, not in cities and not in long-settled rural areas, that fertility and native population growth are extremely high, rural migration is dynamic, and land cover change remains extraordinarily expansive per capita. According to recent UN projections,1 the vast majority, indeed very likely all, of the world's net population growth over the next several decades will occur in the world's poorest cities.

In a paper published in 20092, the first author argued for the importance of rural migration in tropical deforestation in Latin America. This paper updates and builds on this work, following the rapid urbanization and globalization of agricultural production during recent years and in light of more advanced satellite imaging demonstrating this shift. We contend the highest population growth rates and old growth forest conversion will continue to occur in remote rural environments, with notable implications for land cover change research and policy3 specifically, and for coupled human–environmental systems more broadly.4

Despite the inordinate ecological imprint of remote rural populations, what will happen with the population of distant rural communities remains one of the biggest mysteries in demographic and land change research. While data on these populations are scarce,5 the handful of studies examining fertility in remote frontier environments in the Amazon6 and Central America7 suggests extremely high fertility rates exceeding seven births per woman in some locations, even where in some instances it has declined precipitously in rapidly urbanizing former frontiers.8 The timing, pace, and magnitude of the demographic transition among this group, for which we have patchy data coverage at best, will assert an outsized impact on forest transitions, whether directly, as small farmers, or indirectly, following migration to urban areas where the impact will be more removed in space and time vis-á-vis consumption. It remains an open question as to whether the deforestation impact will increase through an earlier transition—more urban dwellers consuming meat but fewer people overall (i.e., increasingly through teleconnected impacts9)—or from a delayed transition—more people overall residing on the planet and more people for a longer period living as subsistence farmers with a direct impact spatially and temporally on tropical forests. In a delayed transition scenario, population pressure on the land from high fertility will be further exacerbated by continued out-migration to newly opened agricultural frontier in other locations. Evidence from Ecuador10 and Guatemala11 suggest that these unusually rapidly growing populations produce a disproportionate number of frontier migrants; subsequent-generation frontier farm children are much more likely to follow the example of their parents and move to another frontier location than are other rural populations. Thus, while the bulk of migration today is characterized by rural-to-urban or urban-to-urban flows, the small fraction of farmland-seeking rural-to-rural migrants has an immediate, enduring, dynamic, and disproportionately large impact on global deforestation, particularly within and adjacent to protected areas.12

We argue that forest frontier colonization by smallholder farmer migrants may continue to be the main proximate cause of deforestation—especially of old-growth forests of high biodiversity and ecological integrity—exceeding the amount of intact forest conversion caused by the more popular culprits, commercial logging and capital-intensive industrial agricultural operations. Because there are no regional-scale data on the proportion of Latin American migration that is rural-to-rural or on the amount of deforestation caused by these migrants, we present several points and provide examples of migrant-induced deforestation in Guatemala to describe how smallholder migrant farmers may represent the largest proximate driver of deforestation in Latin America, and possibly worldwide. This argument is not new; it is a claim posited by researchers with some assertion as recently as the 1990s.13,14 But the position has lost traction in recent years with the dramatic increase in large-scale global commodity-driven farming operations. 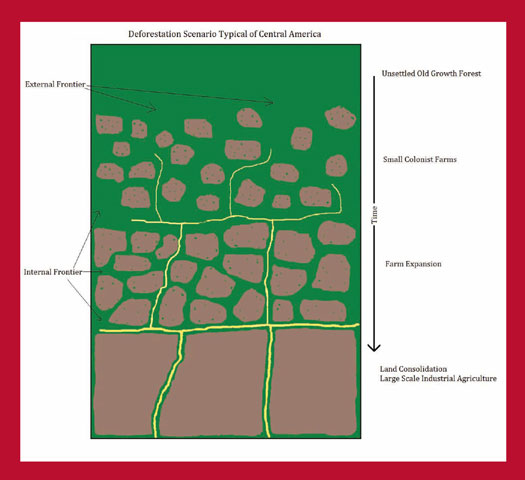 On the Guatemala frontier, as elsewhere, agriculture is expansive rather than intensive because of several characteristics: cheap available family labor, scarce capital, low technology, high cost of transportation, and insecure land tenure. Further, as soon as migrant colonists arrive on the frontier they often clear land in order to establish their claim and begin agricultural operations. As lands become consolidated and converted to large scale commercial agriculture, small farmer colonists are displaced further into the external frontier regions where they initiate a new round of deforestation on previously untouched forest. In this process, as illustrated in Figures 1 and 2, small farmers are displaced from the internal frontier—the border between cleared agricultural land and forest within a farm—to the external frontier—the border between agricultural land and forest outside the last row of farms adjacent to a forested area.22 As deforestation continues within internal frontier regions there is less land available for farm expansion, increasing land scarcity, and placing pressure on farmers to increase farming intensity Land overexploitation can leave the soil exhausted, promoting further displacement and migration of farmers to the external frontier forests. Land abundance also encourages settlement in the external frontier in the first place. Migrant colonist farmers will not gladly settle in already established high-population-density farming regions featuring land unavailability and high land costs.

Therefore, focusing on capital-intensive industrial agriculture as the immediate driver of land cover change may belie the fact that the deforestation of old growth tropical forest was originally caused by small scale farmer migrant families.23 How much initial deforestation is caused by small farmer colonization relative to corporate farming and ranching remains unknown but is likely to represent a disproportionate and significant amount of old growth deforestation of high conservation priority.24

Overall, the proportion of deforestation worldwide that is proximately caused by frontier colonist farmers may even be increasing in some critical conservation corridors. In the past few decades in many rural frontier areas, the rate of deforestation has increased while the rate of population growth has declined, indicating the amount of forest clearing on a per-farmer basis has increased.25 This suggests that even as rural areas depopulate, farmers and cattle ranchers in these low population density areas may be increasingly responsible for deforestation.26 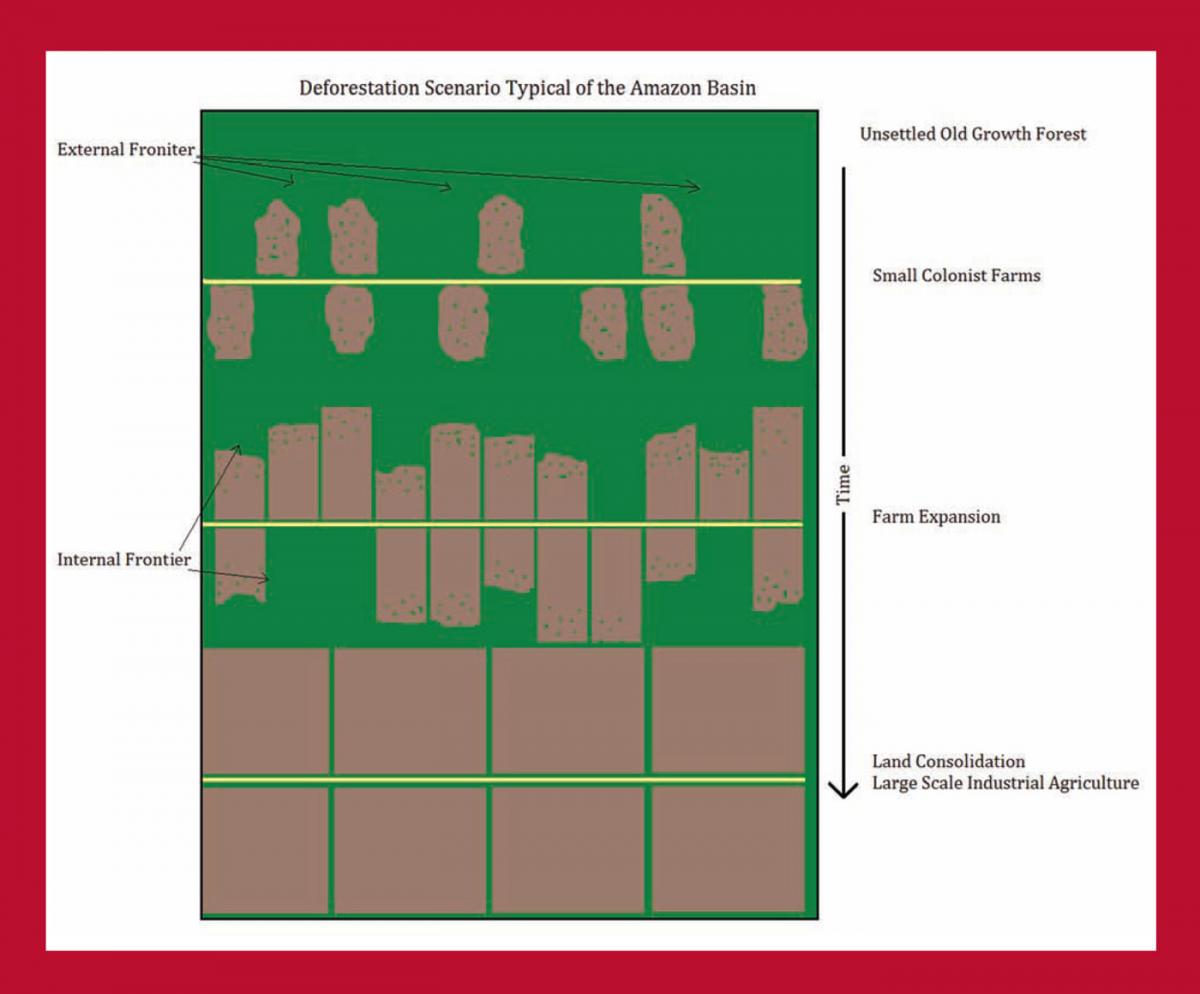 Lastly, forest impact per capita is further enlarged among migrant farm households when, as is often the case, they clear land in new settlement frontiers several times during their life course. This is exemplified in ongoing research in Guatemala where we have observed multiple generations of households migrating sequentially from areas of low land availability to settle in conservation areas, where forest conversion to agriculture changes conservation landscapes to agricultural landscapes.27 Over time, land consolidation and fragmentation, coupled with the exhaustion of forest resources in situ, catalyze subsequent migration by the same household or by second-generation households.28 The pattern is unsurprising and well documented. A (semi)subsistence household, with various options available in response to resource scarcity in a current location, might logically decide to migrate to a place where land is available de facto (if not de jure) as characterized by many Latin American protected areas. Since the impact of a small farm household on forest conversion is located in several different places over time, it is essential that the political, demographic, social, economic, and ecological mechanisms behind rural–rural migration are well studied before policy may be developed to influence this rural–rural migration pathway in ways that conserve the remaining tropical forests and support rural development.

When using remote sensing to quantify forest loss, it remains imperative that the importance of scale and spatial relationships of deforestation drivers be considered. The two drivers discussed thus far in this article, export industrial agriculture clearings and small-scale farmer clearings, have vastly different geographic characteristics, including spatial distribution, clearing size, nearest neighbor distance, shape, and percent of canopy remaining within a clearing. Export industrial agriculture is typically characterized by large rectangular clearings that are spaced closely together and are almost completely denuded of trees (see Figures 1 and 2). On the other hand, small-scale farmers' clearings on the external frontier are often of small size, irregularly shaped, spaced relatively far apart from each other, and still retain a sizeable amount of trees within the farm plot (see Figures 1 and 2).

If all of these distinct geographic properties are not accounted for when designing a remote sensing study, deforestation and its drivers may be misrepresented. As an illustration, a study by Hansen et al.32 used 500-meter MODIS data to identify areas of deforestation. Within these areas a random sample of blocks 18.5 km by 18.5 km of 30-meter Landsat imagery was used to derive rates of deforestation that could be extrapolated to the regions of deforestation as a whole. Accordingly, deforestation from kilometer-sized export agriculture farms would have been easily detectable, but deforestation from small-scale rural migrant farmers, whose incompletely denuded, spaced-apart plots are smaller than the 500-meter pixel size, would have been concealed. Thus, deforestation may be more severe than studies indicate in regions where small-scale frontier farmers remain key drivers of forest loss, further stressing the importance of avoiding the ecological fallacy by matching the scale of the methodology to the scale of the phenomena of research interest. Biomes are also critical in understanding deforestation drivers. In biomes of low rainfed water availability, where agriculture exists, it will tend to be dominated by capital and water intensive large farms and ranches. Where rain is abundant, rain-fed agriculture and small scale household farms may be more likely drivers of land change A recent study examining deforestation by distinct biomes corroborates a migration–poverty pathway of continued deforestation of moist tropical forests using satellite imagery from 2001 to 2010 for Central America.33 The research indicates that The Human Development Index was associated with moist tropical forest loss with Nicaragua and Guatemala, the two poorest nations in the region, experiencing particularly rapid deforestation of moist forests –much of it in areas of small farm household colonization-accompanied by more modest but significant recovery of conifer and dry forests – often areas of out-migration.34 These findings corroborate a Kuznetz curve association of U-shaped deforestation impact among small farm households at one end of the development spectrum, and wealthier urban or peri-urban households on the other.35

Rural migrant farmers will continue to be a dominant driver of the deforestation of primary tropical forests despite the recent expansion of export-oriented large-scale industrial agriculture in the tropical regions of Latin America and elsewhere in the tropics. For the reasons outlined, rural migrant farmers primarily contribute to deforestation along the external frontier, whereas the expansion of industrial agriculture will contribute to further deforestation—but much more to the conversion among non-forest land classes—within the internal frontier. If studies are to accurately assess the extent and drivers of deforestation, and if policies are to be effective at reducing deforestation, it is essential that remotely sensed data be appropriately interpreted with a nuanced appreciation of distinct land use signatures inscribed in space, scale, and shape. It will also remain imperative to continue to collect data on the ground among small farm households regarding their migration history, demographics, socioeconomic characteristics, and land use practices. More research and policy initiative may be usefully directed at the minority population residing in forest frontiers and those with high probabilities of migrating to such areas. The most remote rural dwellers, those for whom we have the least data, will continue to exert an effect heavily disproportionate to their size on tropical deforestation and on the future global population.36

11. L. Suter and D.L. López-Carr, Beyond the Middle of Nowhere: Out-Migration From the Agricultural Frontier in the Sierra del Lacandón National Park, Guatemala, Proceedings of the Latin American Studies 2012 International Congress (2012).

David López-Carr is a Professor in the Department of Geography at the University of California, Santa Barbara and Director of Latin American and Iberian Studies. He researches population, health, and environment interactions in the developing world.

Jason Burgdorfer is a graduate student in the Department of Geography at The George Washington University. He has research interests in human-environment relations, health geography, and applied geospatial techniques.