END_OF_DOCUMENT_TOKEN_TO_BE_REPLACED

Ending Tropical Deforestation: Have We Got Our Priorities Backwards?

In working to change the world, there’s always a need to keep asking ourselves whether we’re focusing on what’s most important. This certainly applies to the effort to end tropical deforestation, which is why I and my UCS colleagues have put a lot of emphasis on figuring out what causes—and in particular, which businesses—are the main drivers of deforestation. Unfortunately, a recent study indicates that that global corporations that have committed to ending the deforestation they cause, have got their priorities backwards. And it suggests that the NGO community—and that definitely includes me—may have had our priorities wrong too.

The study, by Climate Focus and many collaborators, is part of an assessment of the impact of the New York Declaration on Forests two years ago. That Declaration, launched at the September 2014 Climate Summit that also featured a march of 400,000 people through the streets of New York, highlighted commitments by hundreds of companies, governments, NGOs, Indigenous Peoples’ groups and others to work towards a rapid end to deforestation. The Climate Focus report looked in particular at the Declaration’s “Goal 2”: “Support and help meet the private-sector goal of eliminating deforestation from the production of agricultural commodities such as palm oil, soy, paper, and beef products by no later than 2020, recognizing that many companies have even more ambitious targets.”

In evaluating progress toward achieving Goal 2 by 2020, Climate Focus looked at the most recent data showing what are the main drivers of deforestation. Here’s the graphic that gives these results, from two different data analyses (on the left, from Henders et al. 2015; on the right, from European Commission 2013): 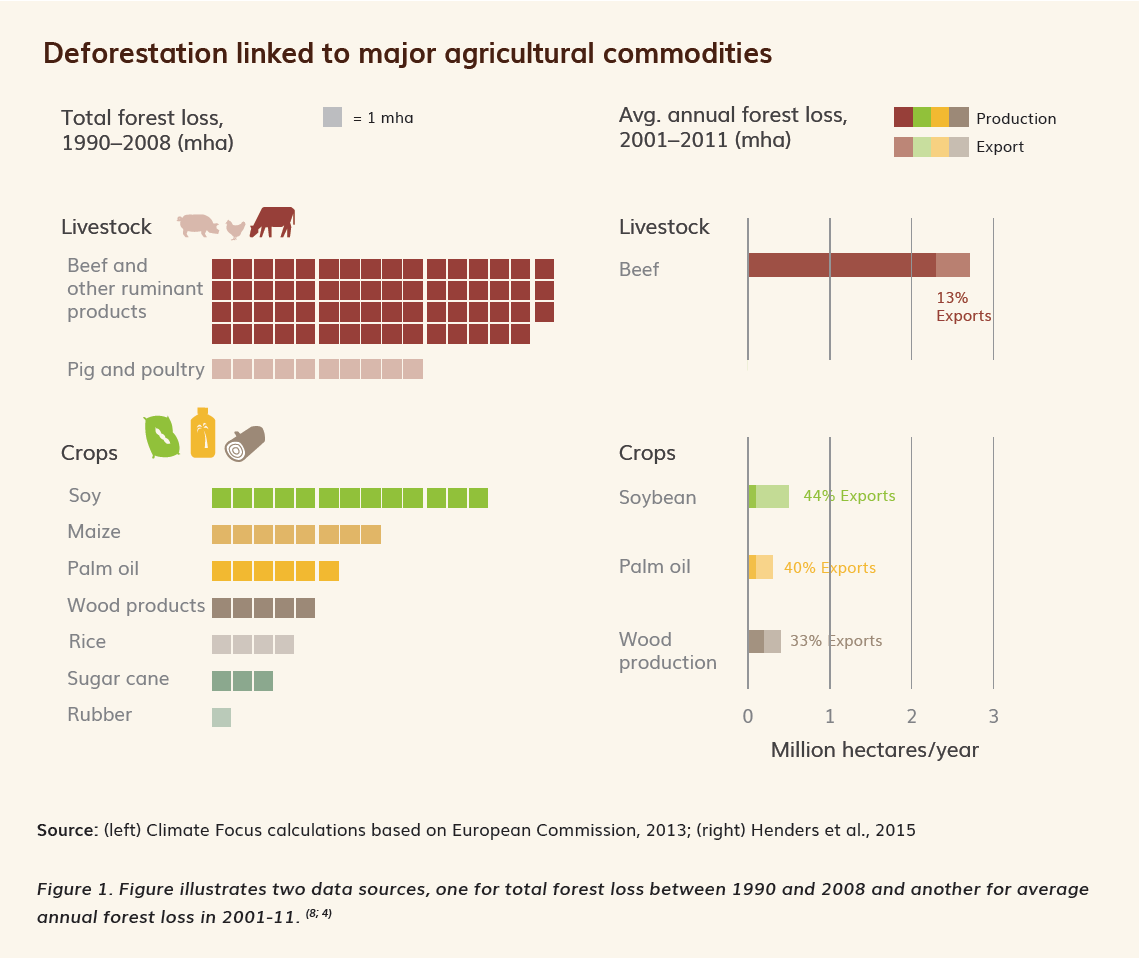 The data is pretty clear: by far the biggest driver of deforestation is beef. Soy is second, but far behind in terms of importance. And palm oil and wood products are even smaller drivers, causing only about a tenth as much deforestation as beef.

You’d expect that corporate priorities, as shown by their pledges to eliminate deforestation, should reflect the relative importance of these four drivers, at least approximately. But Climate Focus found that in fact, it’s the opposite. Here are the percentage of active companies that have made pledges concerning each of these four drivers:

So, it’s not just that the percentage of commitments doesn’t reflect the importance of the drivers. It actually reverses them. The more important a commodity is, the less likely that a company will have pledged to eliminate the deforestation that it’s causing. We’re just three years away from the Declaration’s deadline, but only one out of eight corporations have even stated a pledge to reach that 2020 goal for what is the largest driver of deforestation by far.

The Climate Focus report goes into more depth about this, but in all honesty, and in a self-critical spirit, I have to admit that one reason that companies have emphasized palm oil and wood is that we NGOs have pushed them the hardest on those commodities. And the “we” here includes UCS, and me personally during most of the time that I directed UCS’ Tropical Forest and Climate Initiative (2007-2015).

Sure, we had good strategic reasons to focus on palm oil. Some of these were based on data—palm oil was growing rapidly in terms of global consumption, and was linked to the tropical peat clearance that releases large amounts of global warming pollution. Other reasons were more emotional—we could see that orangutans, which are threatened by the expansion of oil palm plantations, are incredibly cute and charismatic. But the end result was that we concentrated on getting corporate zero-deforestation commitments relating to crops that weren’t the main causes of deforestation.

In the last year UCS has changed the emphasis of its zero-deforestation campaigning to beef cattle and soybeans, and I’ve helped by pointing out its overwhelming importance in other reports that I’ve written. But looking backward, even though the companies can’t escape their fundamental responsibility for their own actions, pledges and priorities, we in the NGO community should have done better too.

This issue of misplaced priorities was made all the more poignant by the recent release of the past year’s annual data on deforestation in the Brazilian Amazon. It’s not good news—almost 8,000 km2 of forest were cleared from August 2015 to July 2016. Here is the data for the last two decades, from the Brazilian National Institute for Space Research, INPE: 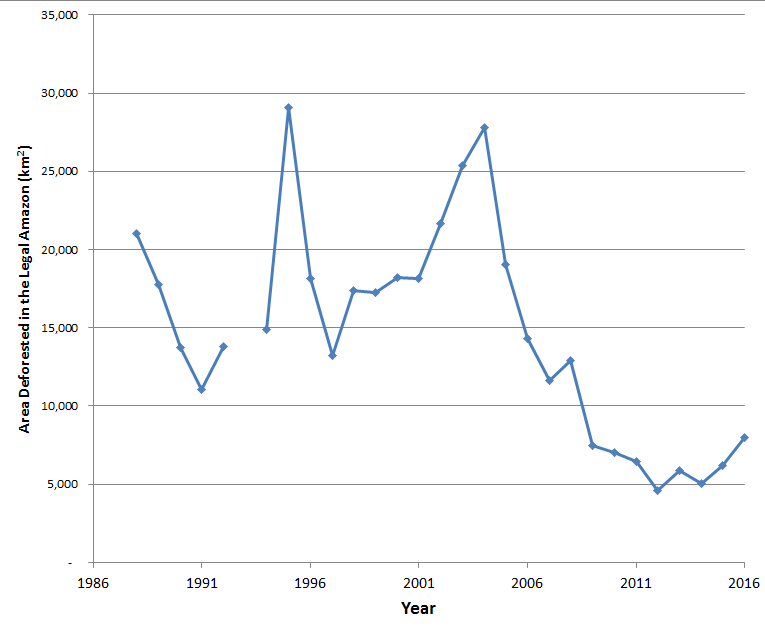 You can see that this is the second year in a row, and the third of the past four years, that deforestation has risen. Although the level is still down about 60% from the average for the decade around the year 2000, the recent trend is in the wrong direction.

Why is this relevant to the issue of priorities? Simply because beef is by far the biggest driver of deforestation in the Amazon, and soy is the second. There are lots of factors related to the increase (e.g.  the political turmoil leading up to the impeachment of Brazil’s President Dilma Roussef and her removal from office in August) but it’s hard to argue that the lack of corporate commitments to ending Amazon deforestation was totally irrelevant.

I don’t want to go overboard with the mea culpa here. Companies have to take responsibility for their actions, and their lack of action. They can’t just say “the NGO community made me do it.” But the Climate Focus report and the new data from the Amazon demonstrate forcefully that when we get the priorities wrong, there are consequences.