END_OF_DOCUMENT_TOKEN_TO_BE_REPLACED

My last post generated a couple of comments that referenced FIRPTA (Foreign Investment in Real Property Tax Act) and the likely impact that the law would “keep Asian demand in U.S. timberland muted”. The law has been around since 1981 so I thought that I would take a look at what the impact of foreign investment on timberland has been to date.

At last weeks Timberland Investment Conference, Stephen Schrock with Manning, Morris & Martin, discussed the Agricultural Foreign Investment Disclosure Act which requires “Foreign investors who buy, sell or hold a direct or indirect interest in U.S. agricultural land must report their holdings and transactions…” Agricultural land includes timberland as well. Penalties for not reporting can be very severe (25% of the fair market value of the land). The USDA Farm Service Agency compiles the data and produces an annual report summarizing the data.

Two comments from the summary of the current report:

The total numbers can somewhat mask what has happened with timberland alone but the graph below tells the story pretty clearly. 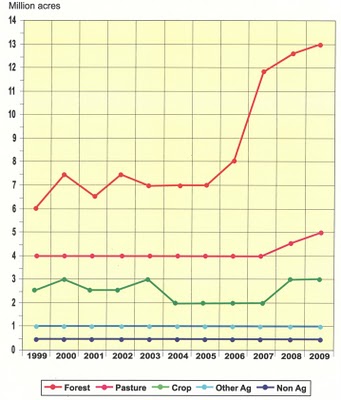 I have to interpret the graph as saying that FIRPTA may have an impact but that it certainly does not prevent foreign investment in U.S. timberland. You can read the entire report here.

So that’s the past. What does the future hold?

From my own personal experience, I can assure you that there remains a strong foreign interest in U.S. timberland by both European pension funds and Asian investors. I suspect that the acquisition of pulp and paper mills by the Chinese will continue and I suspect a few sawmills will get thrown into the mix too. And I can’t imagine that the option of vertical integration of pulping operations is not on the table and that timberland ownership will not be the result. Is that good or bad for us? Ask the employees of the pulp and paper mills in Woodland, Maine, Halsey, Oregon and Potsdam, New York. The Asians supply the capital and the markets and we get the jobs. It might not set well at first blush but that’s a reversal of the way things have been and that’s not such a bad thing.

And remember, as we have seen domestically during the past year, all investors are not institutional or industrial! There are some very large investments coming from the high net worth individuals and families that have changed the market. We MAY be on the edge of another significant change in the ownership of U.S. timberland and whatever implications that may bring. --Brian