END_OF_DOCUMENT_TOKEN_TO_BE_REPLACED

The issue in today’s post concerns why the transaction price of timberland has shown little or no decline in value but the stock price of the publicly traded companies that own timberland has declined dramatically. I will also look at what I think is happening in the timberland market today and how I see the market for timberland investment. But first, let’s set the stage.

In January, I did a post that included some graphs developed from my timberland transaction file. I was looking to see if the data supported a wide-spread belief that timberland values had dropped. The thinking was that housing starts declined, which caused a drop in lumber prices, which caused a drop in stumpage prices (all true), which caused a drop in timberland prices. You can read that post here How Much Did Timberland Values Fall in 2008? The data did not support the logic and did not show any evidence of a significant decline in timberland values. (For those that sent emails saying my opinion was wrong – that was not my opinion, it was just the data). I also wondered what the NCREIF Timberland Index would look like when it was released. The publicly accessible portion of the NCREIF website showed quarterly returns that compound to a 9.5% total return for the timberland in its index in 2008 but the components of the return are not broken out. A recent report by Brookfield Timberlands Management, distributed by Forestweb, shows the NCREIF return broken down by earnings and capital appreciation. 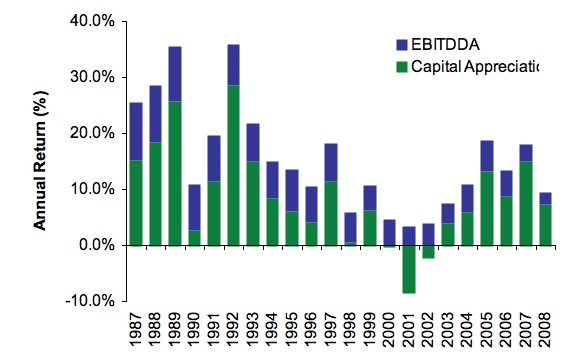 The significant decline in the blue portion of the graph reflects the decline in housing/lumber/stumpage/earnings. The green portion, Capital Appreciation, can be viewed somewhat (not perfect) as a surrogate of the change in timberland value as determined from tract sales and appraisals of tracts – all of which are a part of the index. Note the green from 2000 to 2002. This data certainly contains no indication of a 2008 decline in the price of timberland either.

Below is another graph that I found interesting. It is from the Timberland Report VOL. 10, NO. 2; by the James W. Sewall Company, a highly respected firm with a very long record in the timberland investment community. 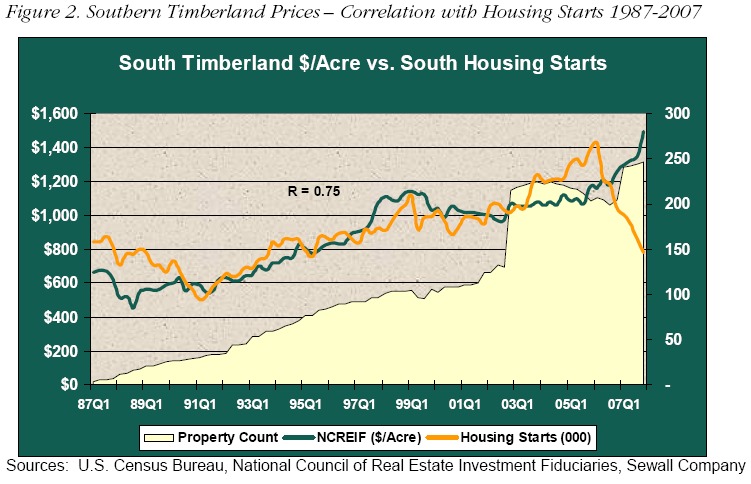 From my perspective, the important take-a-way from this graph is that the old correlation between timberland values and housing starts fell apart. We can speculate as to why and we can speculate as to whether the correlation will return but it’s pretty clear that the conventional wisdom has not prevailed during this economic downturn. Another graph in the report reinforces the historical correlations between housing starts and stumpage prices. That correlation did hold as all timber owners know only too well. You can read the entire Sewall report here(recommended).

Now, let’s take a look at the price of common stock in some of the publicly traded companies that have timberland holdings that represent a significant share of the companies’ assets and see how share prices were impacted last year. Ownership structures of these companies include timber REITs, “C” corporations and limited partnerships but for my purposes today, I will refer to them collectively as “timberland companies”. Let’s look at this chart I made from Google.

It’s hard to see but the blue line just above Weyerhaeuser (green line) is the S&P 500. Weyerhaeuser took an early hit because it has such a major direct investment in housing. I read somewhere that it is the 17th largest home builder. The rest of the timber companies fell about the same amount as, and in synch with, the general market. My conclusion is that the timber companies stock price tracks the stock market rather than with the timberland market. Not a “pure play” in the bunch. Down about 50% when timberland prices held pretty steady.

I have long been a skeptic of the “pure play” concept of acquiring timberland companies (or an ETF) as a surrogate for timberland ownership. Even if 100% of the assets owned by the company were timberland, I would still be a skeptic and here is why.

Timberland investors use metrics based on a time horizon of 10 to 50 or more years. The key metrics are based on a discounted cash flow (DCF) analyses over that time horizon. If you would like to read more about timber valuation than you really want to know, you can do that here. The metrics used by those that analyze stock value are usually based on very short term future cash flows of a year or two (no need to discount those!). The inherent assumption is that the stock price will respond to very short term (a few quarters or few years at most) cash flows and that the stock will be bought or sold in that time frame. Some of the most referenced metrics are based on what happened last year rather than what is expected to happen in the future (current P/E for example). The Warren Buffets in the crowd that actually do take a long term view of stock investing are a clear minority today and I’m sure that DCF is an integral part of their valuation. Don’t misunderstand me. I’m not saying that one way is right and that the other way is wrong, only that they produce different results and that creates a dichotomy in value and an opportunity for long term investors. Given all this, is it any wonder that the stock of the timberland companies has fallen dramatically with the general market decline? The value of their timberland portfolio is based upon the very depressed earnings reflecting current stumpage prices rather than the DCF of future stumpage prices!

At this point, I reach two conclusions (and I know that some will not agree)

And therein is the opportunity.

Here is another stock chart just like the one above except Forestar Group has been added. If ever there was a pure play for timberland/HBU, this is it. Other than some OGM, that is its only asset!

In spite of that, the stock price of Forestar dropped over 80% - the worst of the group. So much for the “pure play” concept. If you want to invest in timberland, you need to own timberland, not stock!

Think about this. Is it possible that the assets of Forestar were worth five times as much in June as they were in November? Some folks sure didn’t think so. To name a couple, Holland Ware and Carl Icahn. Both recognize the dichotomy in valuation methodology between timberland and the valuation of the stock in timberland companies! Both made some serious money with that little bit of information and a lot of cash. Buy at $3 - $4/share, offer $15.00 (still undervalued), sell at $12 or so. Not bad. And the $15/share offer? Even that was well under the underlying value of the timberland/HBU asset.

Okay. We understand what happened in 2008. What is happening to timberland prices now and what will happen in the future? I still have seen no significant decline in transaction prices regardless of the emails I get claiming dramatic declines in prices (no transaction details attached). There is a slowing of transactions, at least one announced major transaction (St. Joe) did not close and several tracts that were put on the market were pulled off. What does this mean for the future?

It may mean that prices will fall. It may mean that buyers are holding their cash until this economic downturn, recession, depression, or crisis begins to resolve itself. I don’t know what the future holds but I do know that there is a lot of pension fund and other cash out there that will be invested somewhere. Today it is going into money market accounts and just kind of sitting there. Barron’s reported about a week ago that there was $4 trillion in money market funds which is about one-half the market cap of the entire U. S. stock market. That is a lot of money and I doubt that it will all stay in cash. At some point, some will go back into the market, some to commodities, some elsewhere and some to timberland.

Long term, I remain bullish on timberland but, in the short-term, I think that stock in the timberland companies is a better investment. The downside is less than timberland and the upside is much, much greater. If you follow Holland Ware, you won’t starve. --Brian

Link to Article: The Dichotomy in Timberland Valuation